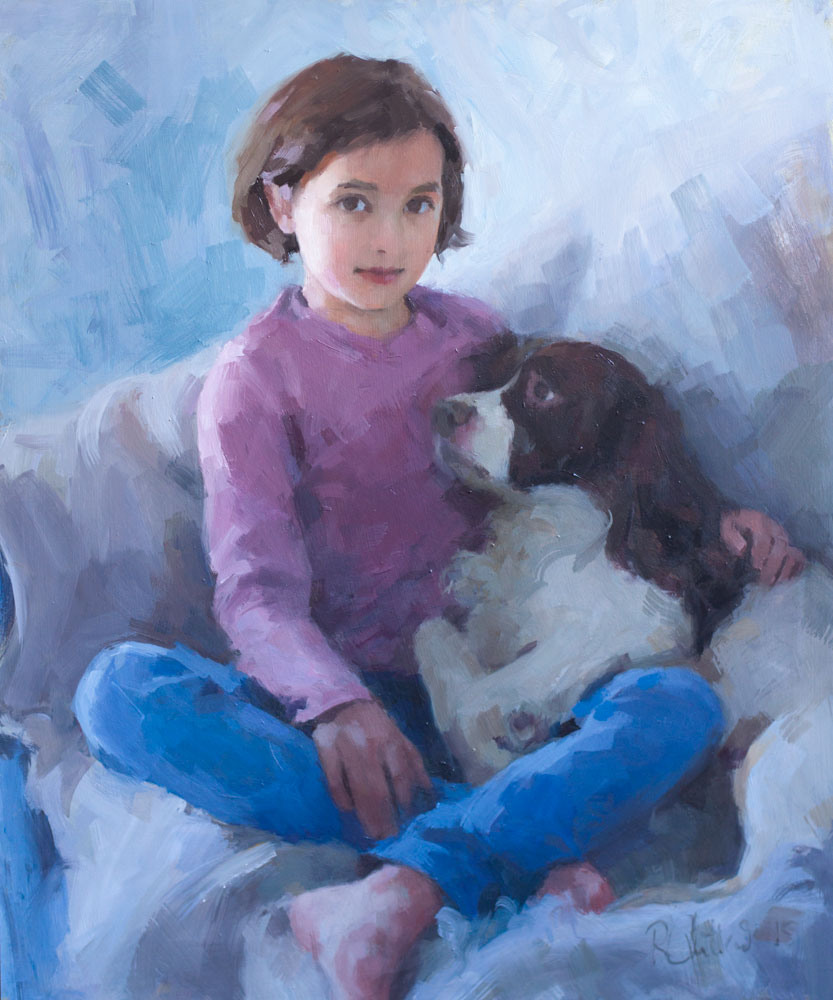 This was a really enjoyable and unusual commission. I was contacted by Helena’s grandfather, Peter back in October, 2014. About 100 years ago, in the early 1900’s, Helena’s great-grandmother, Beatrice Irene, was painted at 7 with her dog, a terrier, by the renowned Edwardian portrait artist Edmond Brock. Three generations later and at the same age, Irene’s great-granddaughter bears an resemblance to her and it was decided that a portrait of Helena and her springer spaniel Pluto should be painted. 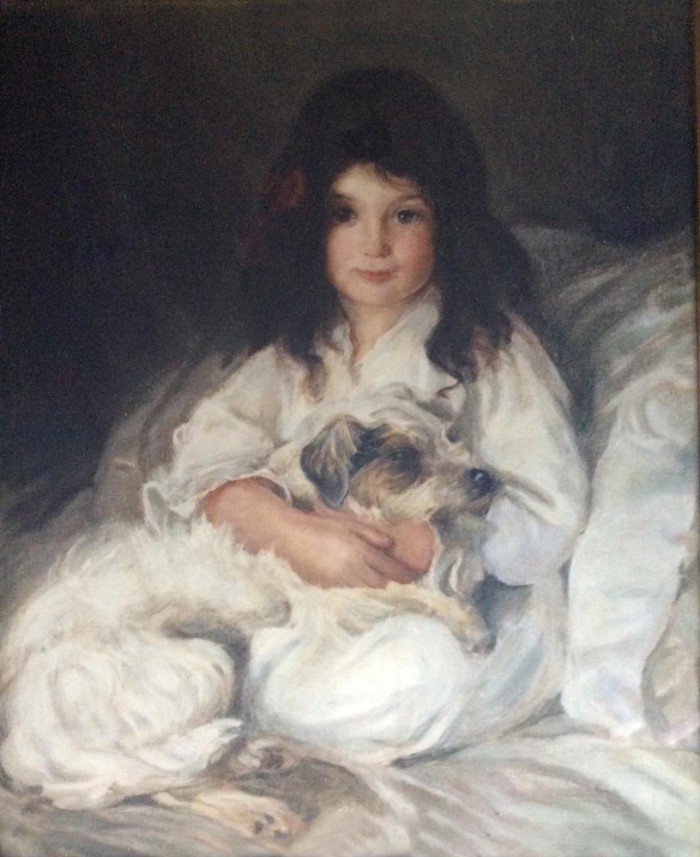 Using the same size canvas, and a similar scale with a view to being hung alongside the Edwardian Brock portrait. But painted in a style that was fitting for a 7 year old girl in the 21st century.

It is always quite interesting to watch the daily development of a portrait. I love the beginning of a portrait where you go from a blank canvas (though covered in a ground, in this case of greenish umber) and make dramatic and energetic marks all over, quickly establishing the composition and seemingly making HUGE progress.

Subsequent days one seems to make rather smaller steps and, though the motion is generally forwards, there are several minor backward steps. As a rule it is good NOT to have too good a likeness early on as this makes you too precious and not prepared to take the risks necessary to create a good painting. For the sake of brevity I have just included a few of the stages.

I thoroughly enjoyed the challenge and am delighted with the final result. I feel that this portrait of a young girl and her dog has a contemporary flavour which reflects the personality of the sitter, but also sits well alongside the portrait of her great-grandmother. 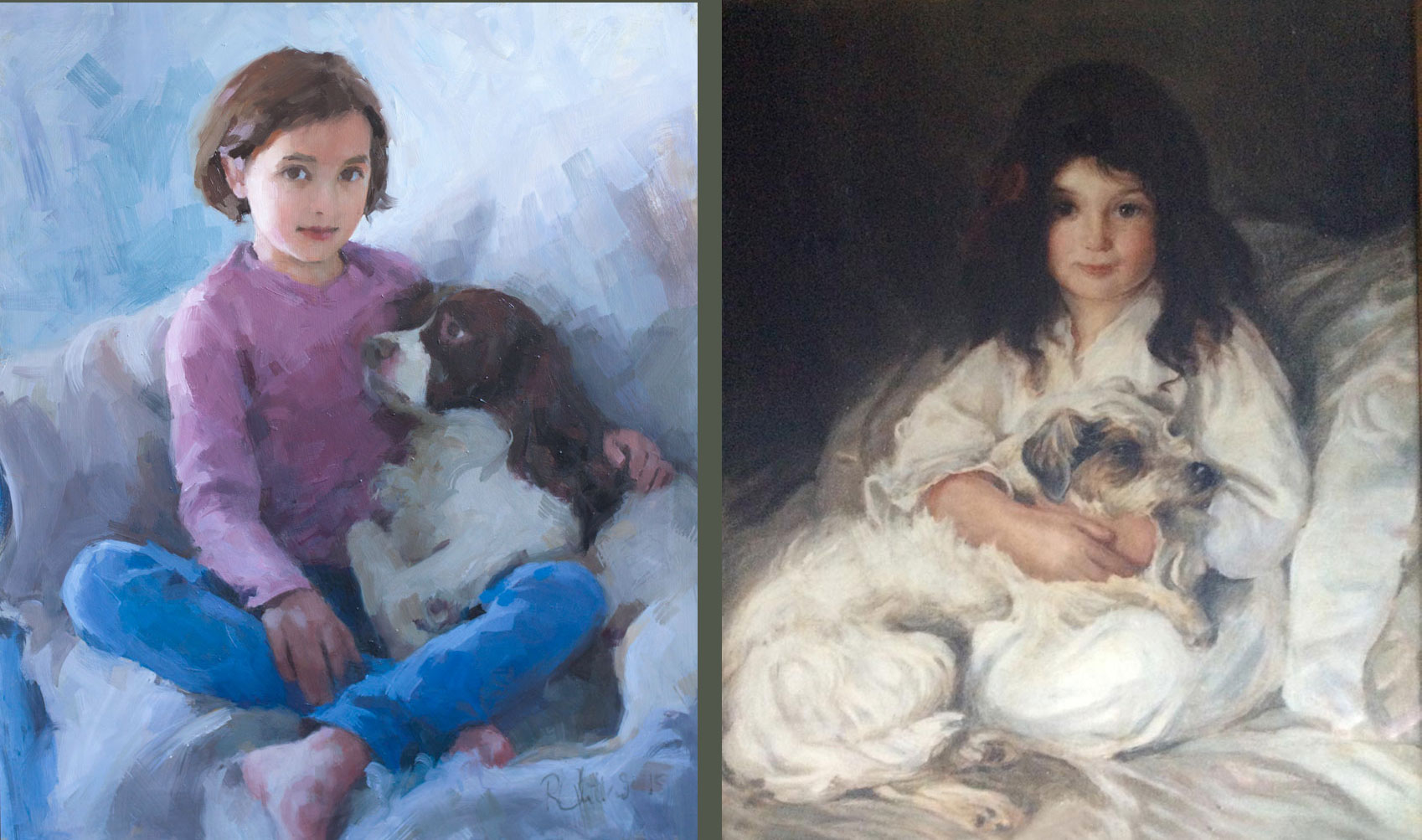 A word from Peter who commissioned the portrait: “First we should all say again how much we love the picture. We set you a difficult problem, that of combining a portrait of a girl of the 21st century and, secondly, producing a picture that would work as a pairing with a portrait of her great-grandmother painted almost exactly 100 years ago when she was the same age; each little girl cradling her dog. You have succeeded on both counts and the family cannot wait to see the two pictures hanging together. Thank you.” Peter Cook, Southampton

2 thoughts on “A Young Girl and her Dog”