Hetta was not keen to have her portrait painted! Her husband commissioned me to paint her but didn’t inform me of her reluctance until I was about 10 minutes away from their house.

With some trepidation as to how I was going to handle this scenario, I arrived laden with all my photography kit and was greeted by Simon. It appeared Hetta was out. I wondered if she had taken to the hills and might not actually return. And, should she return, would I be met with a stony faced and uncooperative sitter? Fortunately, all fears were dismissed when she bounced back into the house with such a warm smile that it was hard to believe that she was indeed such an unwilling subject.

Small, vital and beautiful, warm and completely delightful. I loved her immediately.

We spent some time assessing where it would hang but also thinking about the type of portrait that Hetta would feel less uncomfortable about. The room they were planning to hang the portrait was spacious, with tall ceilings, and necessitated a portrait of a good size. But clearly, my subject did not want a big formal painting of herself. So we homed in on the corner of the kitchen, her favourite spot in the house. And decided to make it a painting about all the things that make Hetta who she is. Her devoted black labs, never more than a few feet away clearly had to feature. But they were so large that I had to put them outside in the painting, as to have them pooled at her feet would have dwarfed her.

Dressed in her favourite jeans, jersey and converse shoes, Hetta sits very relaxed. And yet the diagonal of her leg means that the pose is anything but static. Her tapestry lies on her lap and gives a nice flow to the passage of light through the painting. A sketchbook and pencil lie on the pouffe. The doors open out onto the garden and the light streams in. A vase of flowers bridge the gap between outside and inside. And a large candle sits on the converted kettle drum. (She loves her candles).

We had a surprisingly jolly morning and Hetta turned out to be an incredibly obliging and engaged sitter.

The greatest joy for me was seeing her face when she saw her portrait for the first time in my studio. Hetta had seen a photograph of it already, but seeing a portrait in the flesh is always very different. This portrait is 1 metre 20cm high x 1 metre wide. It is really quite large.  To go from being a very reluctant starter to being genuinely moved to tears is quite a journey. Result. I’m a happy girl. 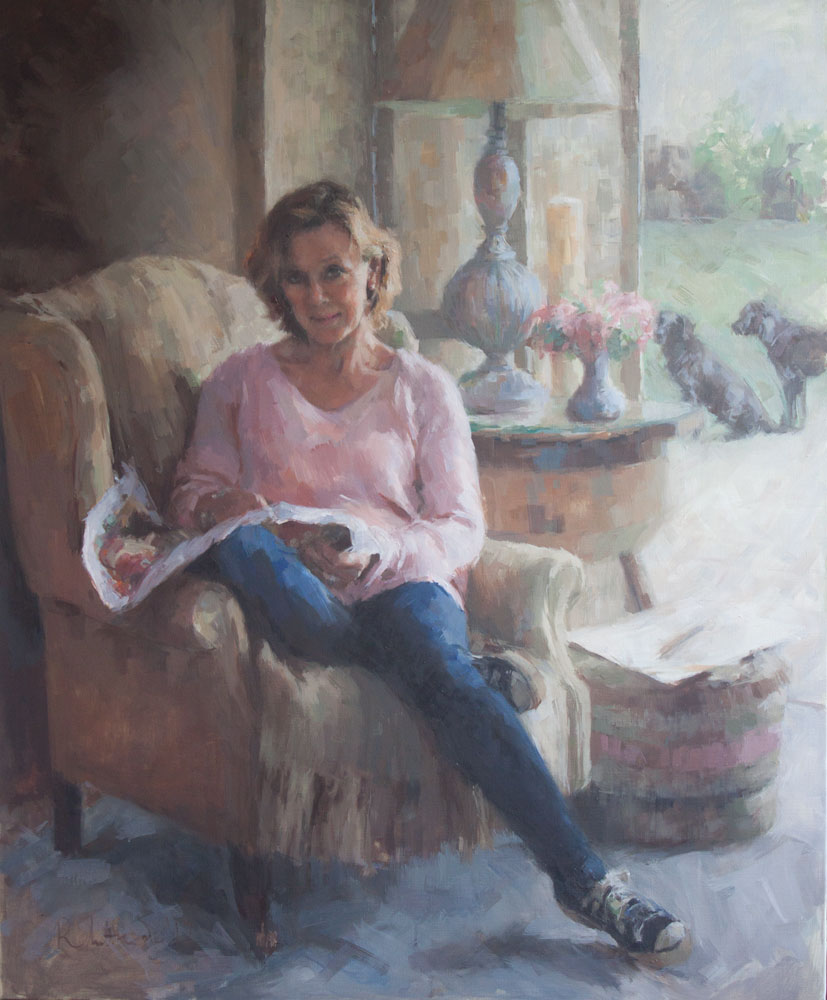